Henri de Toulouse-Lautrec, French post impressionist painter, lithographer, and illustrator, who documented the bohemian nightlife of late-19th-century Paris.
Toulouse-Lautrec was born in Albi into one of the oldest aristocratic families. Henri was weak and often sick. By the time he was 10 he had begun to draw and paint. At 12 young Toulouse-Lautrec broke his left leg and at 14 his right leg. The bones failed to heal properly, and his legs stopped growing. He reached young adulthood with a body trunk of normal size but with abnormally short legs. During his convalescence, his mother encouraged him to paint. He subsequently studied with French academic painters L. J. F. Bonnat and Fernand Cormon. 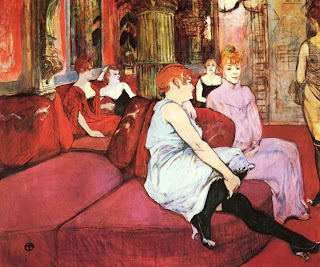 Toulouse-Lautrec, many of whose works are in the museum that bears his name in Albi, was a prolific creator. His oeuvre includes great numbers of paintings, drawings, etchings, lithographs,
and posters, as well as illustrations for various contemporary newspapers. He incorporated into his own highly individual method elements of the styles of various contemporary artists, especially French painters Edgar Degas and Paul Gauguin.
Posted by Roy Evan Burstiner at 11:00 AM

Roy Evan Burstiner
Bellingham, Washington, United States
I am an Abstract Artist and Photographer 61 years old, who grew up in NY, lived in California, Hawaii, and now residing in the state of Washington

Raison Pour Ce Blog -Reason For This Blog
I have been trying to learn French for 3 years now on and off. I figure if I started this blog, I would keep at it, force me to study harder, & hopefully help others in an free and easy format. Let's have fun learning. I have been doing this for a little over 4 years now & it seems to be working.
I hope you enjoy this site and feel free to email me at any time with comments, criticism, or ways to improve this blog. Merci beaucoup- Roy

As always feel free to email me at any time with questions about French or English words. Email: RoyBurstiner@gmail.com